Going back to the 1950s and '60s, rock 'n' rollers like Elvis Presley, soul singers like James Brown, and Motown recording artists processed their voices with effects like reverb, slapback delay, and tape echo. But when The Beatles sound engineer Geoff Emerick hit upon the idea of routing John Lennon's vocals through a Hammond Organ's Leslie speaker for the psychedelic effect on the classic 1966 tune 'Tomorrow Never Knows,' a new era in vocal processing was born.

Bands like 10cc (see: 'I'm Not In Love'), Kraftwerk, and Laurie Anderson all processed vocals in vastly different ways, yielding fascinating results. In recent decades, Björk, The Knife's Karin Dreijer (aka, Fever Ray), Arca, and Holly Herndon have added to new experimental angles in vocal processing, questioning the very idea of what a vocal is and advancing what it can be.

What follows are a few hardware vocal processors that are worth exploring by musicians and producers looking to alter their or some other artist's voice. This isn't the final word on vocal processing (we won't be getting into software), but it's a good place to start.

TC Helicon, with its various vocal effects offerings, could almost dominate a vocal processing short guide almost by itself. And though the company offers various versions of VoiceLive, the one we're going to talk about here is VoiceLive 3, a vocal processor used by Karin Dreijer.

This multi-effects pedal has all of the effects that are included in VoiceLive Play, but with some added features. On top of presets for Reverb, Delay, uMod, Harmony, HardTune (AutoTune), and Transducer, the Extreme offers Synthesizer, Choir, Rhythmic, and Stutter—all of them editable. These effects can also be combined and stored as original presets.

uMod, pronounced 'micro mod,' allows users to flange, chorus, and in many other ways modulate the vocal signal. Harmony creates up to eight voices of harmony, while Synthesizer offers users synthesized vocal effects like a vocoder. Choir allows singers to simulate a choir, while Rhythmic allows singers to slice their vocals and create rhythms out of them, like a sampler and sequencer.

The VoiceLive also features a multi-track phrase looper, which vocalists can use to create live loops, either by layering them or arranging them in serial. The vocal and looping features can also be run independently alongside onboard guitar effects. And while it comes with 200 presets, there is onboard storage for 500 presets, which means vocalists have plenty of room to create their own unique vocal sounds.

An old but goodie. Released in the 1980s, the Boss VT-1 Vocal Transformer is a pretty basic vocal processor by today's standards. While it does Formant Shifting, Pitch Shifting, and Reverb, in addition to offering Mix control, it's primarily known for very convincingly bending the vocalist's gender without producing the 'chipmunk' voice. It also features a Robot button, which is a digital approximation of a vocoder, but not a full-blown one.

The interesting thing about the VT-1 is that the gender-shifting of a voice sounds surprisingly natural. The French electronic band Air used a VT-1 on one of their most experimental tracks, 'Run,' off of their 2005 album Talkie Walkie. That said, the VT-1 isn't super flexible. But if you're going for something simple and retro, it may just work for you.

A modern step up from the VT-1 is the Roland AIRA Series VT-3 Voice Transformer. Roland, of which Boss is a subsidiary, was behind the VT-1, so it makes sense that they wanted to build upon the original's legacy. It seems that Roland's real goal with the VT-3 was to create a flexible live vocal processor, though it can certainly be used in the studio as well.

As with the VT-1, vocalists can use the Roland VT-3 to alter pitch and formant. Also like the VT-1, the VT-3 has dedicated sliders for these functions, as it does for Reverb and Mix Level as well. The VT-3 also features a Robot button, like its 80s predecessor.

But this is where the similarities between the two units end. A dial in the middle of the VT-3 allows vocalists to switch between 10 effects—Synth, Vocoder, Auto Pitch 2, Auto Pitch 1, Direct, Scatter, Radio, Megaphone, Bass, and Lead.

Roland's AIRA technology allows the VT-3 to accurately simulate the VP-330's iconic vocoder. The Radio and Megaphone settings create lo-fi effects, while Scatter creates glitchy sonic artifacts. The Synth, Bass, and Lead settings allow vocalists to turn their voice into synthesizers. And unlike its predecessors, the VT-3 has good memory and modern MIDI implementation. 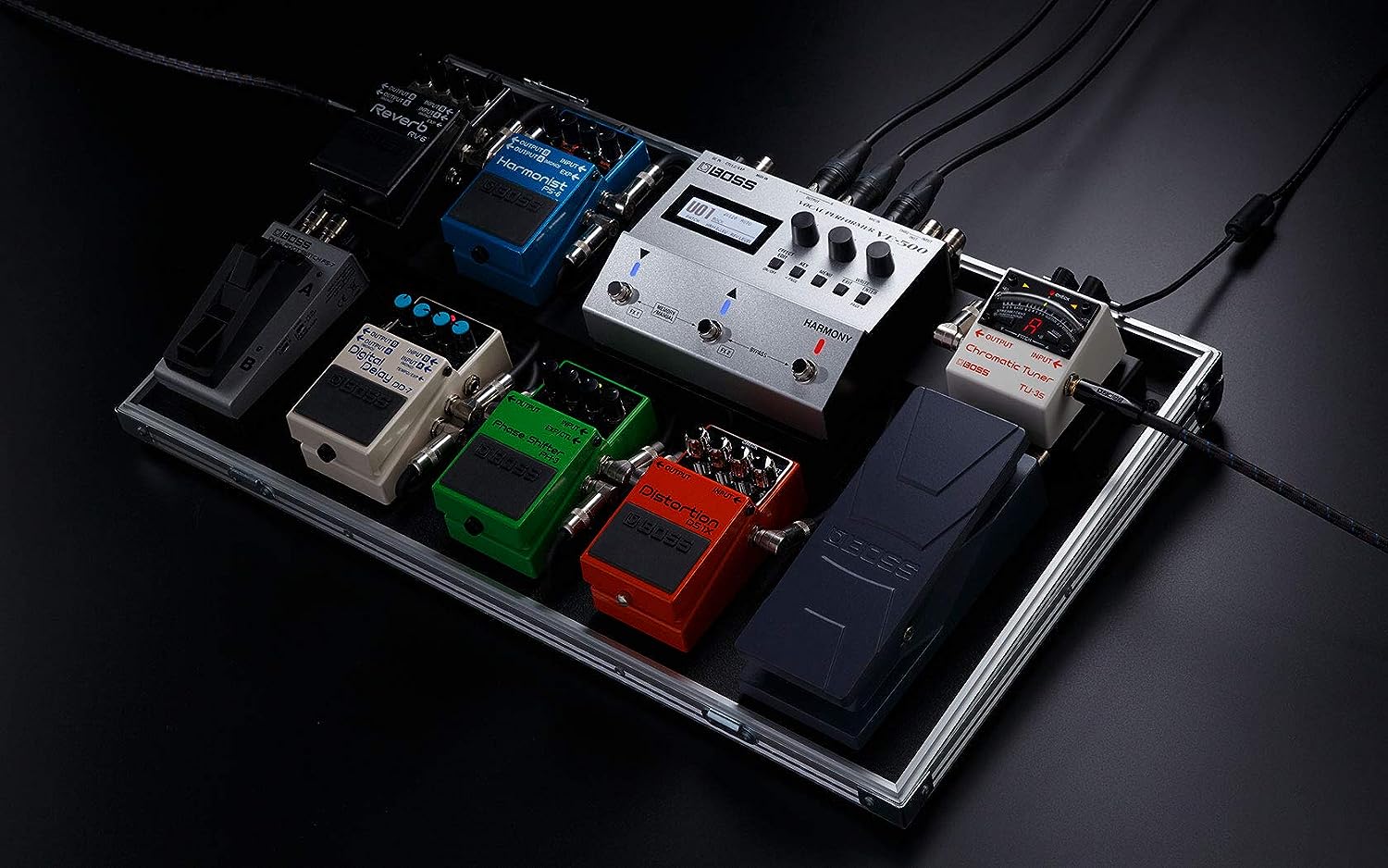 As a rackmount unit, the Tascam TA-1VP Vocal Processor is designed for both studio and live situations. Developed alongside Antares Audio Technologies, the creators of Auto-Tune, it's got some features that the vocal processors mentioned above don't have, such as a microphone preamp, phantom power, compression, de-essing, microphone and tube modeling and, of course, Antares's original Auto-Tune pitch correction.

Now, the TA-1VP is not a processor designed for mangling and warping vocals. It doesn't feature onboard delay, reverb and other modulation effects found in other vocal processing units. What it does well is polish the human voice and, as it is made abundantly clear with the Antares collaboration, give people a hardware solution for the Auto-Tune function in both the studio and for live shows.

The Elektron Octatrack may seem a little leftfield to vocalists looking for a cool processor. It's basically the exact opposite of the TA-1VP and all other vocal processors, because it's not considered a vocal processor at all. Bear with us.

The original Elektron Octatrack has been around since 2011, so it's a stable, flexible, and super inspiring machine. (Elektron released an Octatrack mkII this past December.) Not only can you use it to process vocals, or any signal for that matter, but you can create entire songs on it.

With the Octatrack, you can run vocals through its effects, which include Filter, Delay, Chorus, Flanger, Phaser, Lo-Fi, two types of EQ, Spatializer, Compressor, and three types of Reverb. The Octatrack has eight tracks, each of which can utilize two effects at a time. But here is the cool part: Effects can be chained together to create complex, evolving signal processing and modulation.

On top of that, the Octatrack features a crossfader, which allows users to blend two different scenes together, thus altering multiple parameters in real time. And this just scratches the surface of what the machine can do. The Octatrack can also do parameter locks, which allows user to program each individual step differently in up to a 64-step sequence.

One caveat: the Octatrack is pretty complex. You will have to put the time in to learn it, which means reading the manual and guides written by users. And there are a wealth of Octatrack video tutorials, including ones for using it as an effects processor, so they should get you up and running. Apart from that, you will want to get a preamp so the vocal signal is strong enough heading into and out of the the Octatrack.

Do you have a favorite vocal effects processor or a unique trick you like to use to craft creative vocal sounds? Let us know in the comments.
Oops, looks like you forgot something. Please check the fields highlighted in red.

We understand the importance of online privacy and are committed to complying with the EU General Data Protection Regulation. To reflect our commitment, we updated our terms and conditions. By continuing to use Reverb, you agree to these updates, and to our cookie policy. Learn More